Want to Find Purpose From a Pile of Bricks? Create a Vision. 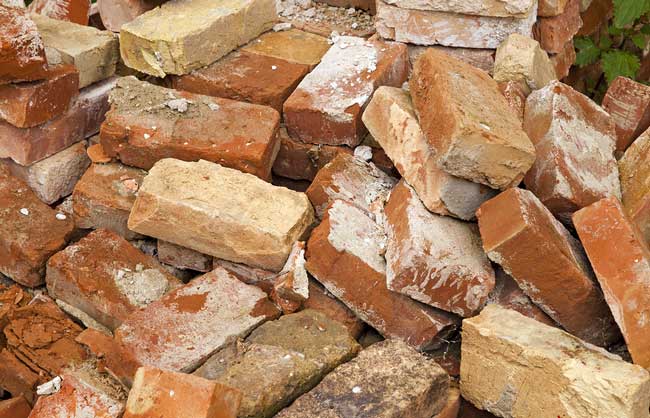 My dad was a proud and selfless firefighter who protected and saved lives. When I was about 11 years old, he pulled into the driveway of our small house with his three-quarter-ton Ford truck overflowing with battered and charred bricks. He had salvaged the red bricks, with clumps of mortar still stubbornly clinging to each one, from a fire that destroyed an old industrial building.

After I helped my dad unload his truck, we piled them in the backyard. Then he gave me a “job.”

“Okay Kurt,” he said, “Now I want you to take this claw hammer and chip off all the concrete and mortar from the bricks.” That’s all he said. He didn’t say what he was going to do with them, how long I had to complete the task, or even how many he would like me to do each day. I’m sure he thought he was helping me to develop character. But I was not looking forward to this task at all. Chipping cement from bricks … no fun! What the heck for? “Come on, Dad!” Not once did he share his vision for the bricks with me.

But I started the boring, dirty and repetitive work. Sitting on a wooden stool every day after school, I cluelessly chipped the mortar from the bricks for several months. It was slow going —a lot slower than it should have been—and there were hundreds of bricks! I always looked for more interesting and fun things to do to avoid chipping bricks. Once in awhile when I was doing something else (anything was better than this!), Dad gently poked me in the ribs with no real urgency and asked, “How about the bricks?”

“Thank you,” Dad said when I finished the bricks after months of hard work that I thought would never end. I had nightmares that I would be chipping bricks the rest of my life! What surprised me next was what Dad did with those bricks. He began to build a beautiful planter box around the entire front of our house. It was magnificent. And with the leftover bricks he constructed a pathway all the way to our apple tree in the back of the house.

Now, I love my dad. But I had no clue what he had planned for those bricks. I wish he had shared his vision with me. It would have given me a reason and a purpose for the menial work I was doing. I could have been his apprentice and learned how to lay those bricks. If I had seen my dad’s vision, I would have been more motivated to complete my fully relevant job. The work would not have changed, but my purpose for the work would have. Why should that make a difference? What do you think?

Visions inspire. People need to know why what they do matters. Remember the famous bricklayer story? A passerby happens upon three bricklayers and asks each what he was doing. The first said he was laying bricks. The second stated he was building a wall, and the third enthusiastically exclaimed, “I’m building a cathedral to God.” Clearly, the third bricklayer understood the vision. His work became his devotion.

Communicating a vision and leadership are inextricably linked. President Ronald Reagan once made the observation, “To grasp and hold a vision, that is the very essence of leadership—not only on the movie set where I learned it, but everywhere.”

For companies that have embraced the Entrepreneurial Operating System, the company’s vision is the organization’s raison d’être. But before it’s real, Gino Wickman urges, “Entrepreneurs must get their vision out of their heads and down onto paper. From there, they must share it with their organization so that everyone can see where the company is going and determine if they want to go there with you.”

Developing your company’s vision EOS style doesn’t require 100 pages. It’s two pages, in fact. The Vision Traction/Organizer (V/TO) methodology guides management teams to answer eight questions that will inspire healthy debate and discussion. The vision will get everybody going in the same direction.

And that can be a beautiful thing. Patrick Lencioni, author of “The Five Dysfunctions of a Team,” said, “If you could get all the people in an organization rowing in the same direction, you could dominate any industry, in any market, against any competition, at any time.”

Dad and I laugh about that long since completed job. The planter box still adorns the front of my childhood home. The pathway has been moved a couple of times but remains connected to our apple tree … and to a great lesson for me. Any work can be meaningful when filled with genuine purpose.

Create abiding purpose for those who work with and for you. Don’t short change the need all have to feel that they—and their work—are fully relevant. It’s well worth it. The cathedrals—and the planter boxes—are waiting to be built!

Want more tips on how you can create inspiring visions for your company?