How to Focus on a Few Business Goals to Accomplish More

Remember the hysterical plate spinners from the days of the variety shows like Ed Sullivan or Hollywood Palace? These were the guys who would balance plates on long narrow poles and spin them one after another while frantically running back and forth between a dozen or more plates in a fruitless attempt to keep them all spinning at a high rate of speed.

Audiences were mesmerized by these acts—watching the performer add more plates until there were so many spinning it was inevitable they would all fall and break. Of course, the artist could keep just one to four plates spinning for hours, but that wouldn’t be entertaining.

Establishing your business goals is a bit like spinning plates. The fewer you focus on, the more likely you’ll succeed.

That’s the power of focus. When companies lose it, they slow down, become bloated, and less profitable while chasing too many initiatives.

For instance, when I worked for the Gerber, baby food company, the firm had gone through a period of diversification when it added numerous LOBs that were tangential to its core business.These brand extensions included a baby furniture company, Buster Brown shoes, children’s clothing, toy lines, a trucking company, and a chain of day-care centers.

Gerber’s revenue ballooned but its profitability deflated. The company didn’t recover until a new CEO came in and immediately recognized what had happened to this once high-performing industry giant. They lost focus.

The CEO began shedding LOBs that were not Gerber’s core business: primarily baby food and a narrow set of baby care items. The company shrunk in total revenue, but profits grew. The brand now continues its dominate position in the baby aisle and is owned by Nestle.

When Steve Jobs returned to Apple to run the company after the ouster of John Sculley, Jobs proceeded to return it to its roots: computers.  He cut products like laser printers, handheld devices (Newtons), and trimmed its computer models from dozens to just four: a desktop and a laptop, one each for business and the consumer. “Deciding what not to do is as important as deciding what to do,” Jobs said. “It’s true for companies, and it’s true for products.”

In other words, Jobs restored focus.

Ironically, sometimes companies lose focus because the CEO or owner gets bored. A lot of CEOs and owners are entrepreneurs or even visionaries, and they get bored with day-to-day company operations. They want something new and different and aren’t afraid to take the company down a perilous dark alley in search of the next new thing.  They start chasing “shiny stuff.”  Leaders at all levels are also eager to leave a mark, to make a difference. That sometimes means exploring opportunities without considering consequences.

Successful CEOs could even have a slightly inflated view of their abilities. “I’ve been successful launching this business, why wouldn’t I succeed in the next?”

The Entrepreneurial Operating System (EOS) is the framework I teach that helps companies establish and manage their focus. We help them understand their core focus, a combination of their purpose, cause, or passion and their niche.  The former is the reason “why” they do what they do, and the latter is the “what.” When these two are clear—purpose, cause, or passion and the niche— then this core focus becomes the filter through which all investment decisions must be made. Without this cheesecloth, the danger to wander increases.

In addition, EOS helps leadership teams understand the principle: Less is more.  Setting three to seven annual goals as the basis for a company’s annual plan dramatically increases the likelihood to accomplish so much more than throwing 37 goals into the plan. By focusing clearly on the most important and consciously leaving aside the less important, these wise leaders actually set their company and colleagues up to get much more done. Stephen Covey actually wrote a book about this: First Things First.

Next, we know that people just have a way of fraying at the edges over time.  It seems that 90 days is just about the maximum sustainable time to keep that laser focus. So, smart leaders help their teams set “rocks”—crisp, quarterly priorities. Again, three to seven is the right number. Staying focused on just a few ensures you’ll accomplish much more. Seems counterintuitive, but it’s true.  If your job is spinning plates, you’ll keep them moving longer if you have fewer to manage.

Recently I was working with a senior management team that had 56 prospective rocks. With all of these arrayed in front of them on a whiteboard, they realized the futility of trying to get all of them accomplished in 90 days.  We went through the list two or three times, with the idea of focus, focus, focus, lighting the way.

We kept the goals that were paramount; we combined goals when there was a close match, or we killed goals that weren’t as important as the others. Finally, we whittled the list down to seven goals.

The reaction from the management team at the close of the following quarter was universal. “That was an amazing quarter! We did so much, and the small group of really critical rocks helped us stay focused on the most important things.” That’s the power of focus in action.

Now, how do you manage your own personal time to accomplish your goals? First, attack your goals in 90-day increments. You can have personal rocks.  Managing your time is critical to maintaining focus. Indeed, executives have constant demands. Said leadership legend Peter Drucker, “Demands of the organization, the demands of the people and the demands of change and innovation,” Drucker cautioned, “It will become increasingly important for executives to be able to manage their time. But one cannot even think of managing one’s time unless one first knows where it goes.” 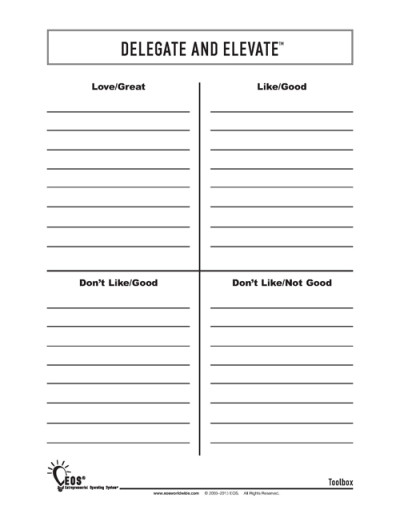 A Tool That Will Help You Maintain Focus

Finally, I’d like to introduce you to a handy EOS tool that will help you focus your time on where it will do the most good in your company. It’s called the Delegate and Elevate™ tool (See below). The tool helps you decide where your time can be best spent. The concept is simple. The tool exposes where you invest your time and drives you to focus on those activities where you excel and from which you derive real energy.

Delegate and Elevate divides your activities based on your skills or aptitude (what you are really good at) and the level of personal satisfaction you get from the task (how much you like/love something or how much you dislike and actually hate something). Quite simply, this tool sure makes things clear. And remember, those things that you aren’t good at and hate will be in a quadrant for someone else who excels and loves those activities. So … delegate and elevate and invest your time in what you love and where you excel. 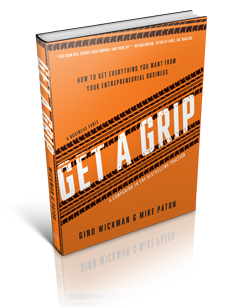 Download a Free Chapter of Get a Grip on Your Business

Learn how the power of focus can translate into extraordinary results. Download and read chapter one of Get a Grip, the book that provides vivid details on how other companies are employing the Entrepreneurial Operating System.